Today, the City of Albuquerque Aviation Department and the New Mexico Film Office unveiled a digital interactive display of New Mexico film and television productions at the Albuquerque International Sunport. Designed and developed in partnership with local creative agency, Ideum, the new film kiosk lets travelers explore the cities, towns, and scenic vistas of New Mexico and learn about the film and television productions that have been produced there.

Located just past the security checkpoint, the kiosk welcomes both incoming and outgoing passengers with a vivid 75” digital display showcasing locations, information about productions, behind-the-scenes photos, and full trailers. Viewers control the experience, browsing either by production or location, on a 43” inline digital touch display. 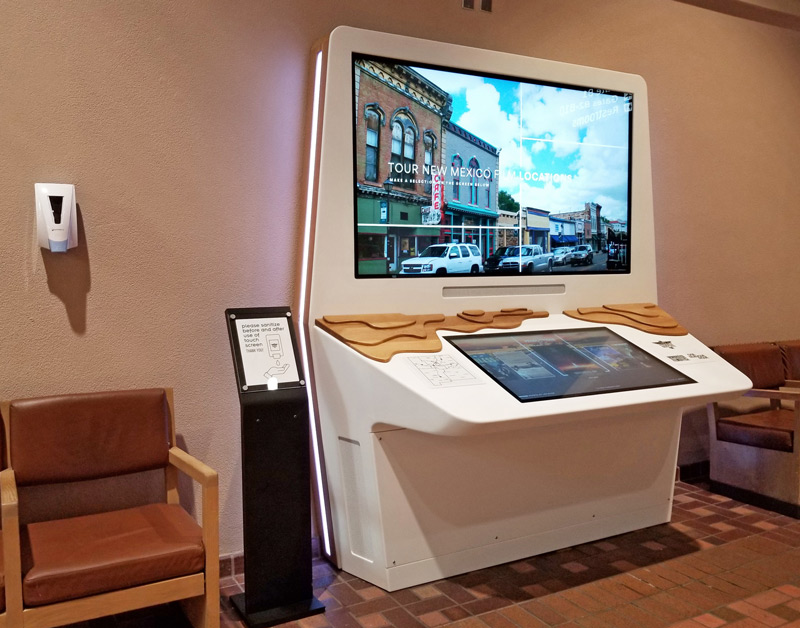 “Film is a key component of New Mexico’s creative economy. Not only does it inject millions of new dollars into the economy, but it’s trickle effects support hundreds of small businesses. The film industry naturally has also created a new sector of the tourism industry. The addition of the digital Film Wall at the Albuquerque Sunport will share the New Mexico film and television industry with visitors and encourage them to visit parts of the state that may not be on their itinerary,” said Alicia J. Keyes, Cabinet Secretary, State of New Mexico Economic Development Department.

“The Film Wall at the Albuquerque Sunport is a creative collaboration between the New Mexico Film Office, the City of Albuquerque, and New Mexico local digital technology disruptors, Ideum. Through it, we will be able to share highlights of New Mexico’s impressive filmography with everyone who passes through, drive film tourism, pique interest in towns all across the state, and inspire storytellers who visit New Mexico to make their films and television series here,” said Amber Dodson, New Mexico Film Office Director. “Ideum’s technology not only allows us to market New Mexico in a fresh and interactive way and share what films and television series have already been created in New Mexico, but it also allows us to continue to add to the content library with what is yet to come,” she added.

As New Mexico continues to become a sought-after destination for filmmakers, this partnership allows travelers to discover some of their favorite scenes in real life. The kiosk’s content management system is fully cloud-based, allowing the New Mexico Film Office to remotely update the system anytime there is a new production.

“It’s no secret that New Mexico has become a sought-after location for film productions of all sizes, and this partnership with the New Mexico Film Office and Ideum brings many production gems to life as travelers have the opportunity to experience them as they await their flight,” said Mayor Tim Keller. “Our hope is that travelers are pleasantly surprised to find out that Albuquerque and New Mexico served as a backdrop for some of their favorite films and TV shows.”

Every aspect of the kiosk was thoughtfully designed in-house at Ideum’s custom fabrication studio, including the ultra-hygienic Staron acrylic surface. With health and sanitization top of mind, the material used to house the kiosk is non-porous and resistant to chemical cleansers and sanitizers, allowing the Sunport to utilize its rigorous COVID-safe cleaning practices on the kiosk.

“It’s important for us to continue to elevate the customer experience at the airport while not losing sight of the safety protocols we’ve implemented as a result of the coronavirus pandemic,” said Nyika Allen, Director of Aviation for the City of Albuquerque. “Partnering with Ideum on a project we’ve envisioned for several years made that possible.”

While this project has been in the works for over a year, it would not have been possible without the contribution of State Representative Antonio Maestas. The State of New Mexico, City of Albuquerque, and Ideum each played a pivotal role in bringing this concept to life, truly exemplifying the New MexicoTRUE spirit.

About Ideum:
Ideum is a 20-year-old digital design firm based in Corrales, New Mexico. Deeply rooted in the museum field, the firm has worked with museums across the globe developing cutting-edge digital exhibits. Ideum develops touch and touchless hardware, designs and fabricates custom exhibits, and develops interactive software. Learn more at www.ideum.com.